Not just any cover but, the Christmas Run 295 | December 2017 Cover of the OGR Magazine that features Skip Natoli’s Polar Express Layout made exclusively for Skip by TW TrainWorx! Chief Traingineer, and Creative Director – Roger Farkash, had a blast working with Skip and bringing his vision of exactly what he wanted his “in the style of – Polar Express” Layout to be. Here’s picture of magazine taken in my office chair…

Roger says, “Hello, take a picture of the magazine on the Polar Express we’re working on for Pete!” So of course… I did : ) 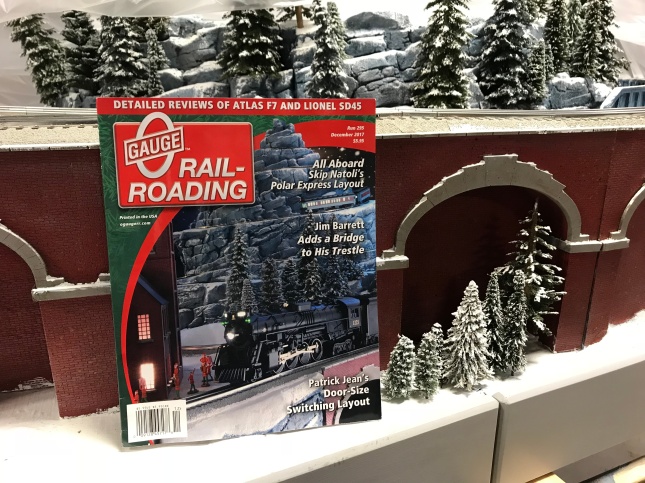 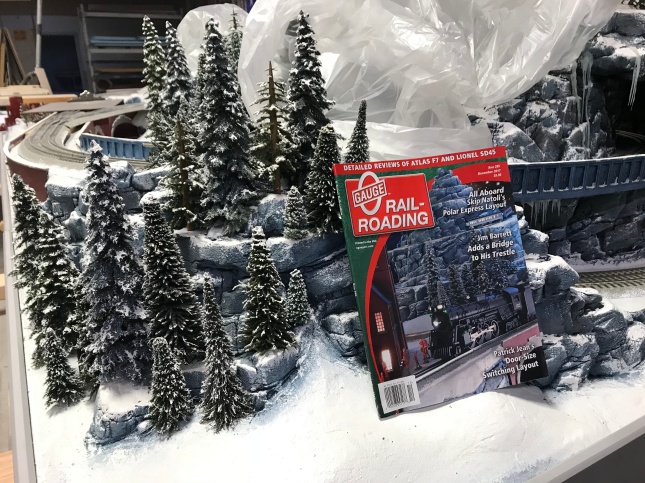 Then Roger said, “Wait, I am going to go get a Polar Express Train…” 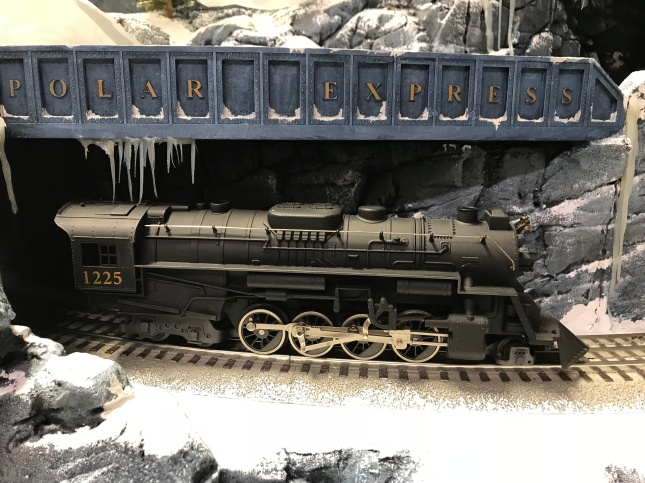 So I was on the OGR Forum and the wonderful OGR Webmaster shared this *Traintastic article and YOU can read it right here… Enjoy!! POLAR EXPRESS ARTICLE

Now it’s time to head home and root for those ASTROS playing in the World Series!!! #HoustonStrong

Track Plan Talk and Traindame on the loose!!

We have the pleasure of working on a custom layout for Dr. Davis and yesterday, George was pretty excited (as he always gets when trains are running) to show me the first loop of track he laid and wired… check it out:

Just now, I went back on the studio floor and saw the entire track laid on Dr. Davis’s layout with two trains on the tracks ready to engage… With NO Traingineer in sight, I was on the loose… check THIS OUT:

It’s that most wonderful time of year when trains can be seen swirling around the Christmas tree base and this year, TW TrainWorx has several custom Holiday Layouts around the country that have been producing some serious Eye Popping Results!!!

Traindame aka Dorcie and Chief Traingineer aka Roger, were doing some serious arithmetic the other day and were pretty mind boggled by the facts and just exactly how many eyeballs will have seen our custom Holiday Train Displays… this is where the calculator got involved adding up over, (yes seriously) 1 million eye balls and over half a million people have and/or will experience a TW TrainWorx layout by going to one or several of these displays which are *NOW SHOWING FOR THE 2016 HOLIDAY SEASON:

Are YOU in the TW TrainWorx Holiday Layout Eye Ball Count??

One of the coolest aspects of being around the incredibly creative, crazy talented, and super skilled Traingineers is being able to see first hand the massive amount of progress that can happen in a week… a day… or heck even in a couple of hours on the studio floor!

So with that in mind, and having my handy dandy iPhone and Facebook *Live* video, I’ve officially started my “Traindame… Live in 5” series and invite you to view my very first episode which features a cool look at the making of the Houston Museum of Natural Science’s Trains Over Texas displays opening November 18, 2016.

Oh… and be on the lookout for a truly behind the scenes, I’m talking – filmed WAY in the back portion of our studio sneak peek look at the 17′ Pecos River Bridge : )

Hats off to this first ever… ‘TRACKLAPSE’… Enjoy!

TW TrainWorx is excited to announce the addition of three incredibly talented, motivated, and highly skilled Traingineers who are in the midst of fabricating one of our largest train displays to date for the Houston Museum of Natural Science. The display is over 1,300 square feet and is guaranteed to become a destination experience for years to come!

Ben Galbraith, Connor Erickstad, and Alan Lockwood came to Roger and I proposing they use their digital media skills to document the fabrication of the RAPTOR RAIL… check out their first video:

*I thoroughly enjoyed this video and the size and scope of the Houston Museum of Natural Science layout is Awesome. Continue making the magic. – Bob C. Texas

*Wow wow wow! You can learn a LOT from these. I look forward to sharing with our listeners. – Derek T. Indiana | Notch 6

TW TrainWorx is experiencing an incredible first half of 2016 with Traingineers traveling to; New York, Texas, Nebraska, California, and Pennsylvania for train events and custom layout installations.

This past April was particularly jam packed starting off with a custom 8′ x 20′ layout installation for our dear friend Skip in Suffern, NY – check out some process shots while on the studio floor: 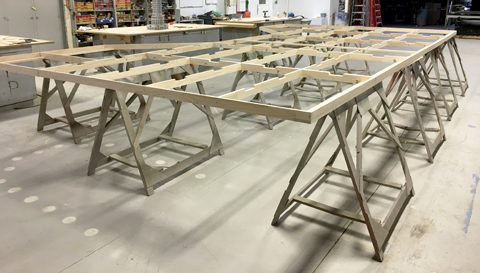 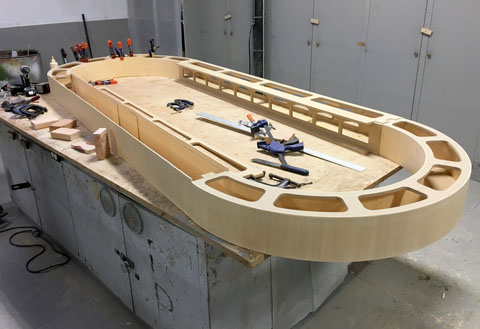 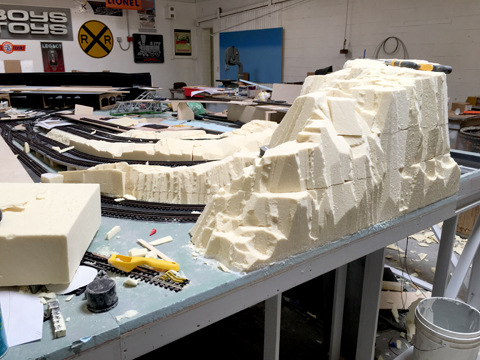 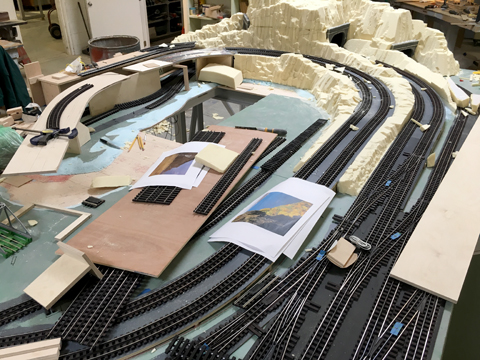 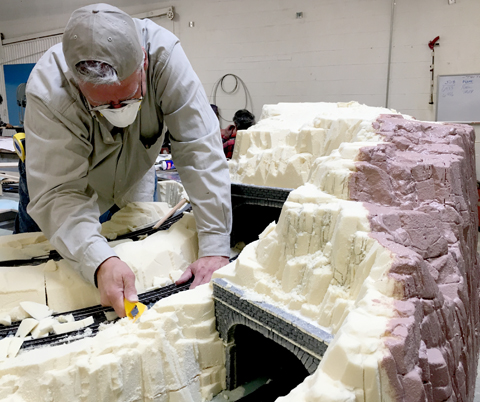 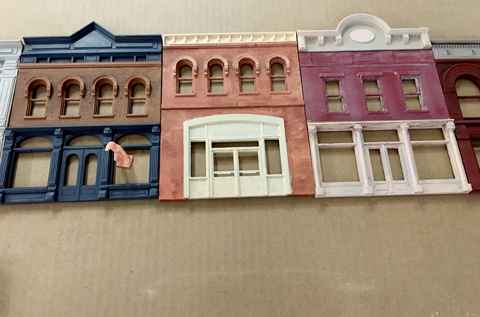 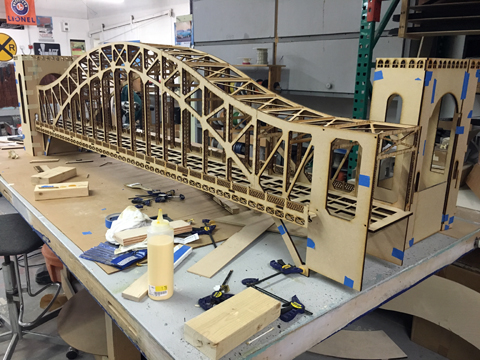 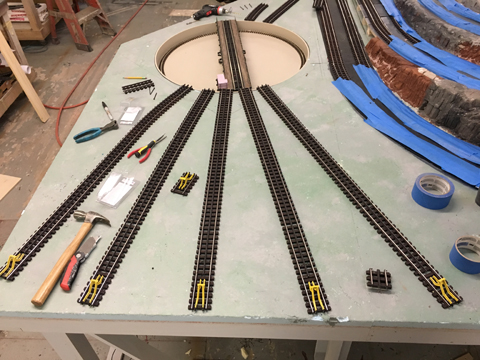 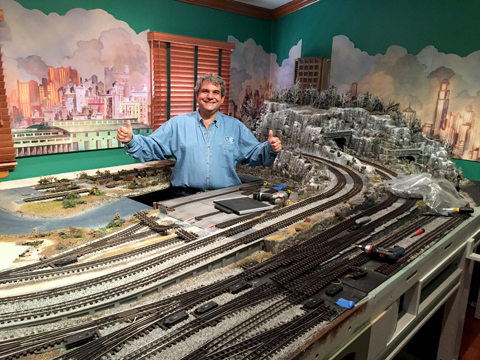 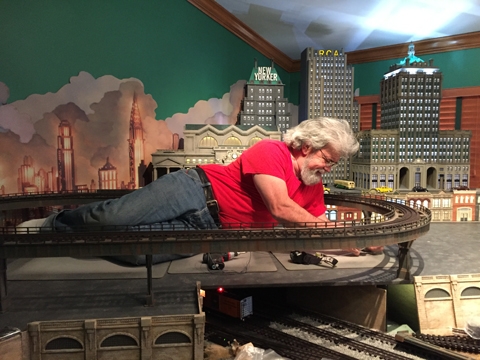 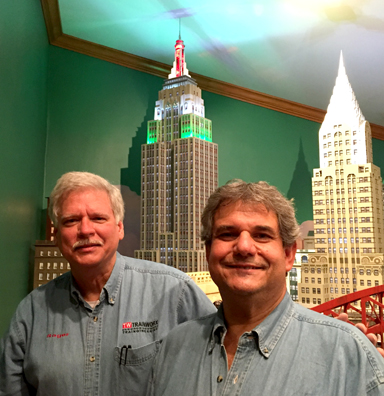 From New York, Chief Traingineer, Roger Farkash, then met up with Traindame and Traingineer, Roy McClellan, at Spring York where its always fun to see old friends, meet new friends, talk trains, and happy to say, we came back with five solid leads for custom layouts!

Back in Texas, Traingineer George Watson, lead a crew and delivered a 5′ x 10′ custom layout just outside Houston. Here are some shots of the layout right before it loaded out and then settled in it’s new home:

The very next day the Traingineers and Traindame were off to Omaha for the Berkshire Hathaway Shareholder’s Meeting to put up the BNSF layout in the BNSF Booth. It’s always fun seeing Warren Buffett and his friends. This year Bill Gates had a special Virtual Reality Film Crew set up a shot right dab in front of the layout. Enjoy some photos from the BNSF Booth on the Convention floor, first up Bill Gates’ Virtual Reality Film Crew… 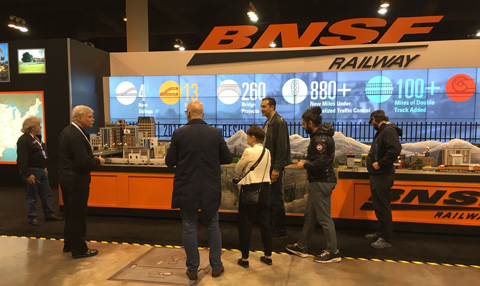 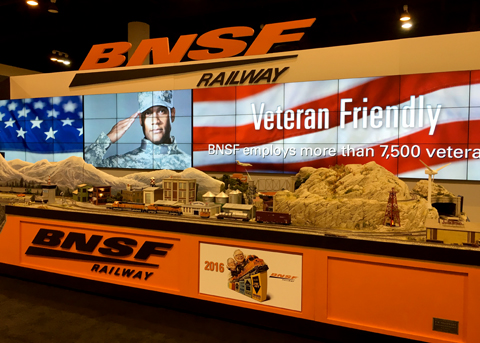 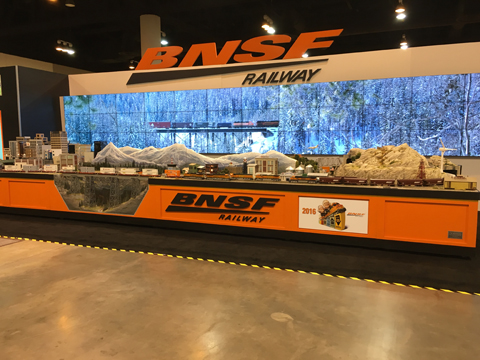 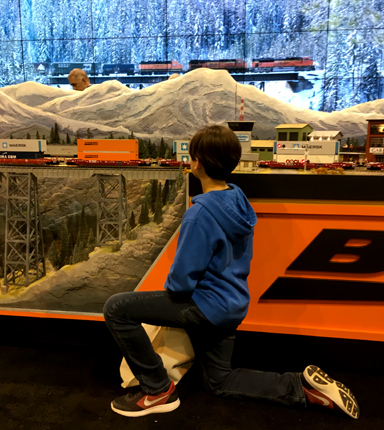 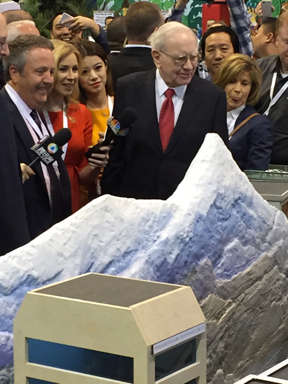 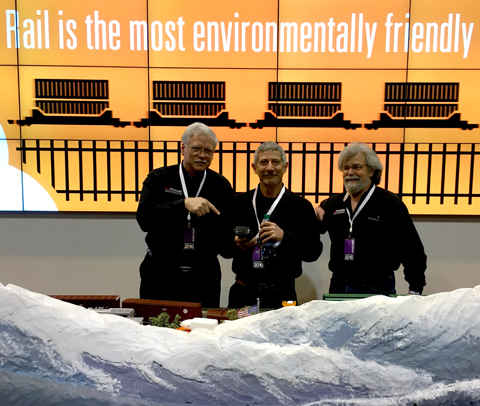 It’s not everyday you have the opportunity to make someone’s dream come true! Below you see the Mayor of Sacramento, and ex NBA player, Kevin Johnson, embracing Roger at the BNSF layout for having found just the man that can make his dream of an ‘Underground Railroad’ layout in his mother’s ‘Underground Bookstore’ come true… more on that as it develops : ) All and all – another fabulously, traintastic time was experienced at the 2016 Berkshire Hathaway Shareholder’s Meeting!

P.S. Please feel free to call us and start conversations about OWNING YOUR OWN custom TW TrainWorx Layout! (877) 881-4997

P.P.S. Or… email me at dorcie@traindame.com and let the collaboration process commence : )